In his military career he served in many space operations, launch, and acquisition jobs. General Taverney held numerous positions in the conduct of real time on-orbit operations of complex taskable space systems, including developing operational support software. General Taverney served in numerous launch positions, including leading the transition of the EELV program. His final position was as Vice Commander of Air Force Space Command.

Since he has retired, he has served on SMC/SSC and Space Command advisory boards and has supported numerous acquisition and launch system reviews. He has received an Air Force Scientific Achievement Award, a Legion of Merit, a Distinguished Service Medal, and a Schriever Fellowship. In 2010 he was inducted into the “Space Operations Hall of Fame”.

In the civilian world he had been a company President, COO, General Manager, Chief Engineer, Chief Scientist, and program manager. He has managed and led the development of numerous space payloads, including the Commercially Hosted Infrared Payload (CHIRP). This program received the Aviation Week Program Excellence award in 2012, the NASA Stellar achievement award (2012), and was recognized by C4ISR Journal as one of the year’s biggest breakthroughs in networks, sensors, and intelligence. General Taverney has won numerous awards for the management of complex, leading-edge developments, and having them perform on-time and on-budget. In 2018 General Taverney was the recipient of the AIAA Werner Von Braun outstanding Program Management award.

In 2014 he received the General Bernard Schriever lifetime achievement award. In 2016 he received an Air Force Space and Missile Pioneers Award and was also inducted into the Air Force Space Command Hall of Fame.
Speaking At
Space Acquisition Panel | (1.5) Continuous Learning Points Available 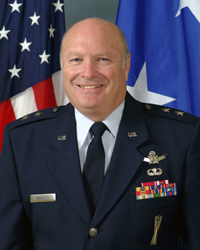