A Supply Officer with 26 years of Active Duty Service. He holds a Masters of Science degree in Operations Research from the Naval Post Graduate School, and a Bachelors of Science Degree in Mechanical Engineering from the Georgia Institute of Technology. He is also an Executive Program graduate from Tuck at Dartmouth. Prior to serving as OPNAV N414, CAPT Lugo served as N4 (Plank Owner) for the US SECOND FLEET.

CAPT Lugo is a native of Mayaguez, Puerto Rico. He enlisted in the Navy in 1995 as part of the BDCP (Bachelor Degree Completion Program [NFO]) while attending Georgia Tech, and received his commission in 1996 via the Officer Candidate School (OCS) in Pensacola, FL.

CAPT Lugo has a daughter, Catalina (19) and a son, Felipe (14).
Speaking At
NAVSUP/Logistics Panel 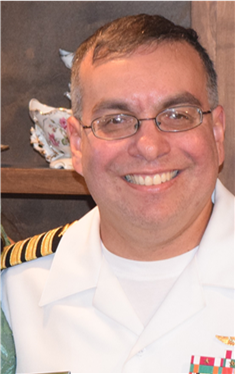