In December, 2014, Mr. St. Pierre was selected as the Naval Sea Systems (NAVSEA) Command Enterprise Information Technology Officer, a Senior Level Executive (SL) position, which included the duties of the Chief Information Officer, and Director of Cybersecurity for shore and business systems.

April 2014, he was selected as the Principle Assistant Program Manager for Combat System Integration on INDEPENDENCE variant Littoral Combat Ship.

From 1986 to 1997, Mr. St. Pierre served in three ships on the West Coast, including USS FLETCHER (DD 992), USS ANTIETAM (CG 54), and USS PRINCETON (CG 59), as well as on the staff of the Commander, Naval Surface Force, Pacific Fleet, where he was the Future Plans Officer.

Mr. St. Pierre is a graduate of the College of the Holy Cross in Worcester, Massachusetts, where he received a B.A. in Russian Language and Literature in 1986. Upon graduation, he received his commission in the Navy through the Reserve Officer Training Corps. 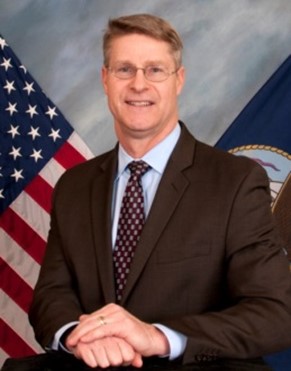