BG Collins comes to PEO C3T after serving as the PEO for Intelligence, Electronic Warfare and Sensors (IEW&S) since May 2019. As the PEO IEW&S, he provided technical and managerial oversight of the development, acquisition, fielding, and life cycle support of the Army’s portfolio of intelligence; electronic warfare; cyber; integrated base defense; force protection; position, navigation, and timing; biometrics; and target acquisition programs.

BG Collins was commissioned through ROTC in 1992 into Armor with a Bachelor of Science from Shippensburg University. As a junior officer, he served at Fort Carson as a Tank Platoon Leader in 2-77th Armor Battalion, 4th Infantry Division. Following his branch detail to the Signal Corps, he served in Fort Gordon as a Communications Platoon Leader in the 124rd Signal Battalion, and in Germany as a Battalion Signal Officer and Company Commander with the 1st Infantry Division.

He was then selected into the Acquisition Corps in 2000 and was assigned to U.S. Army Signal Center in Fort Gordon as a Training and Doctrine Command Systems Manager and Combat Developer. BG Collins went on to serve at Fort Monmouth as an Assistant Product Manager (APM) for Warfighter Information Network-Tactical (WIN-T), and an APM of Software Integration with Future Combat Systems. BG Collins then served in the Pentagon as a Department of the Army Systems Coordinator for Tactical Army Communications systems, and later selected as the Executive Officer for the Army Acquisition Executive and Assistant Secretary of the Army (Acquisition, Logistics and Technology).

From April 2010 to July 2013, BG Collins served as the Product Manager for the WIN-T Increments 2 and 3 ACAT 1D programs within PEO C3T. Following War College, he was selected to serve as the Army’s Project Manager for Distributed Common Ground System-Army, PEO IEW&S, from June 2014 to July 2018. Prior to becoming the PEO IEW&S, BG Collins served as the Assistant PEO IEW&S from August 2018 to April 2019.

BG Collins holds Masters Degrees from Webster University, Oklahoma University, and the National Defense University. He completed the Combined Arms Services Staff School and Command and General Staff College at Fort Leavenworth, Kansas, as well as the Armor Officer Basic Course, Signal Branch Qualification, Signal Advanced Course, and Systems Automation Course. He is a graduate of Eisenhower School of Strategic Studies at Fort McNair, where he received a Master’s Degree in National Resource Strategy. BG Collins is a member of the Acquisition Corps and is Level III certified in Program Management.
Speaking At
Army C5ISR Panel 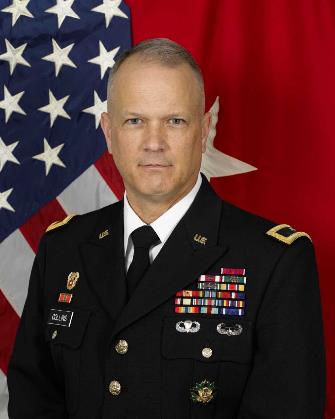