Brigadier General Ellison was commissioned on 26 May 1993. Upon graduation from Infantry Officer's Course, he was assigned to Second Battalion, Sixth Marines in Camp Lejeune, North Carolina where he served as a Rifle Platoon Commander, Weapons Platoon Commander, 81mm Mortar Platoon Commander and Weapons Company Executive Officer. His deployments included Operation Sea Signal in Guantanamo Bay, Cuba and a deployment to the Mediterranean with the 26th Marine Expeditionary Unit (Special Operations Capable).

Brigadier General Ellison assumed command of Second Battalion, Sixth Marines in June, 2009 and deployed to Marjah, Afghanistan in support of Operation Enduring Freedom. Upon completion of Command he attended the National War College and was later assigned as the Senior Aide De Camp to the 35th Commandant of the Marine Corps. Upon leaving the Office of the Commandant, Brigadier General Ellison was assigned to the J-5, Middle East Directorate, on the Joint Staff. He then served as Brigadier General Kyle B. Ellison Commanding General, Marine Corps Warfighting Lab the Deputy Executive Assistant to the Vice Chairman of the Joint Chiefs of Staff. Upon completion of his tour with the Joint Staff, he was assigned as the Director, Marine Senate Liaison Office. After duties in the Senate, Brigadier General Ellison commanded the 7th Marine Regiment and participated in operations along the SW Border with SPMAGTF-7 before serving as the Director of
Expeditionary Warfare School. 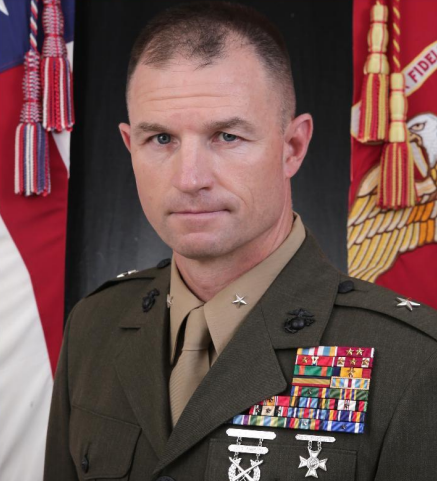