As the director, Defense Information Systems Agency, Vice Adm. Norton manages a global network and leads more than 8,000 military and civilian personnel who plan, develop, deliver, and operate joint, interoperable command and control capabilities and defend an enterprise infrastructure in more than 42 countries. This mission directly supports the president, secretary of defense, Joint Chiefs of Staff, combatant commanders, Department of Defense components, and other mission partners across the spectrum of combat and combat support operations.

As the commander, Joint Force Headquarters – Department of Defense Information Network, Vice Adm. Norton is charged with the direction and synchronization of defensive cyberspace activities, providing unity of command and unity of effort across the Department of Defense. She is responsible for organizing, training, and equipping the military and civilian staff who secure, operate, and defend the DODIN.

Vice Adm. Norton, a native of Oregon, graduated from Portland State University with a bachelor’s degree in general science. She was commissioned in 1987 through the Navy Officer Candidate School. She holds master’s degrees in computer science from the Naval Postgraduate School, and in national security and strategic studies from the Naval War College, where she was the President’s Honor Graduate. She served as a fellow on the Chief of Naval Operations (CNO) Strategic Studies Group XXXII.

Vice Adm. Norton has served in information warfare billets at all levels, afloat and ashore. Her assignments include Naval Communications Stations in Hawaii and Nevada, as well as command in Bahrain. She developed cyber security programs on the staffs of U.S. Pacific Command and Pacific Fleet. She directed communications for Cruiser Destroyer Group 12 aboard the USS Enterprise and for the U.S. 6th Fleet and Naval Forces Europe. She served as the director of Command, Control, Communications and Cyber, U.S. Pacific Command. She also served multiple tours for the Office of the Chief of Naval Operations, including as the director of Warfare Integration for Information Warfare.

Prior to her current assignment, Vice Adm. Norton was the vice director of the Defense Information Systems Agency. 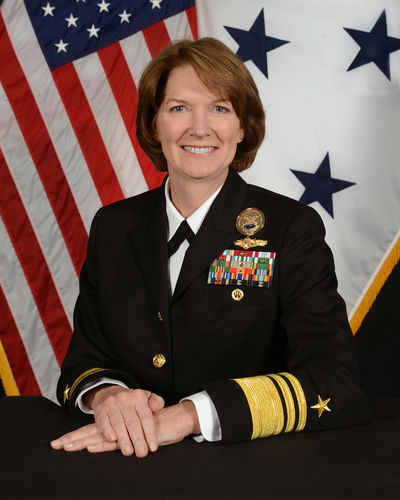