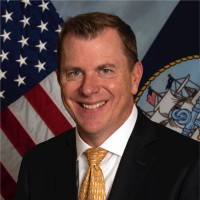 Full Name
Mr. Aaron Weis
Job Title
Chief Information Officer
Company
U.S. Department of the Navy
Speaker Bio
Aaron Weis was named Department of the Navy Chief Information Officer effective September 29, 2019. As DON CIO, he is the Principal Staff Assistant to the Secretary of the Navy for information management, digital, data and cyber strategy. In this role, he is also responsible for reviewing the DON budget proposal for Information Technology (IT) and National Security System (NSS) expenditures and investments, and certifying whether it adequately addresses concerns from enterprise efficiency and cybersecurity perspectives.
Previously, he served as Senior Advisor to the Department of Defense CIO. In this role he focused on driving strategy and support for the critical CIO programs, including Joint Artificial Intelligence Center (JAIC), Enterprise Cloud, Cyber, and Command, Control and Communications (C3). He led the effort to develop the DoD Enterprise Cloud Strategy as well as the DoD IT Modernization strategy. Aaron led the first ever CIO accreditation of the $46 billion IT budget across the Department.

Prior to his role at DoD CIO, Aaron was Senior Vice President and CIO at Axalta Coating Systems, the former DuPont Performance Coatings business, created in 2013. Aaron arrived at Axalta in 2015 with the mission to transform the legacy IT organization and infrastructure into a platform ready for Axalta’s business to grow on. At Axalta, he transformed the IT systems by fully moving the company to a cloud delivered infrastructure, consolidated ERP systems and created a captive off-shore IT center in India. With the infrastructure and organization transformation complete, the IT strategy shifted to providing innovative business capability based on SAP S/4 and supporting growth by driving strong IT integrations of acquired companies.

Before moving to Axalta, Aaron was the Vice President and General Manager for Boston-based Sensata Technologies’ Magnetic Speed & Position business, which was acquired from Honeywell in 2010. As business manager and integration leader, Aaron successfully integrated the former Honeywell business into Sensata’s global automotive business and moved three acquired automotive production plants in Asia and Europe to Sensata’s centralized facilities in China, as well as creating a 10 year strategic plan for the business that more than doubled revenue.

Aaron was Sensata’s first CIO as a newly independent company. He started at Sensata in October 2006 when it was a division of Texas Instruments, subsequently becoming Sensata Technologies, a $3.0 billion leader in the world of Sensors, Electrical Protection and Controls. Aaron built a global IT team with the charter to develop and deploy a technology infrastructure and vision for the newly independent company.

Previously, Aaron was Vice President of Business Applications and Enabling Technology for Tyco International. At Tyco, he was responsible for the coordination, direction and strategy of the business application landscape for both corporate and cross-business unit applications. He also was the leader for IT Vendor Management across the $40 billion enterprise.

Before joining Tyco, he was the Director of Operations and Enabling Services for Siemens Corporation where he was responsible for building and operating corporate services for use among 15 U.S. companies and several regions in North and South America. While at Siemens, he held several roles both in the US and in Germany.